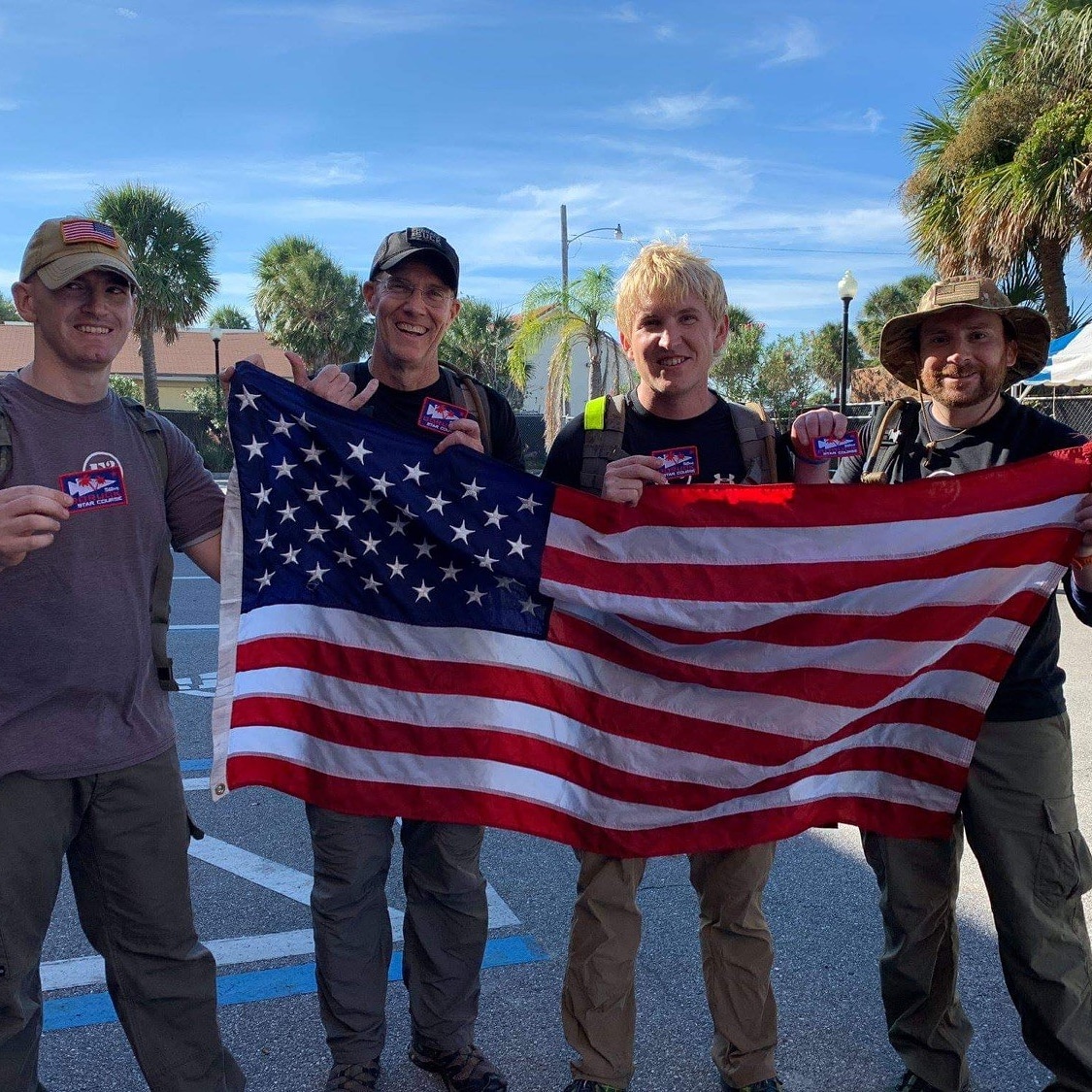 Once upon a time, four men had a dream of walking 50 miles. Little did they know, their dream would soon become a nightmare. These men went by the names: Skinny Pete, Klinger, Paperboy and Linus (YHC). This is their story.

I received text from Klinger one random day in June “Hey brother, 50-mile Star Course Jacksonville, FL. You in?.... I don’t want any pussies on this trip.” I remember not wanting to ruck 50 miles, but the thought of not being considered a pussy in the eyes of one of F3 Hartsville’s most distinguished, bad-asses outweighed all reservations.

17:00 Friday, November 9th our team, “The Bookbag Bandits,” arrived in Jacksonville Beach, Florida. It was pouring down rain and nervous anticipation was setting in. The two pre-race objectives we had were to find food and buy a street map. We ate at Castillo de Mexico, “high protein and high carbs” we said, “it won’t hurt our stomachs” we said. FL mexican cuisine will not hold a candle to SC mexican cuisine unless you are comparing gas combustibility by farting on said candle. FL would win. After planting seeds of bowel destruction, we began the search for a street map. Four gas stations later, we turned up empty. We found our map at Barnes and Nobles. We all agreed this was the last paper map on the planet.

20:00 we report to GoRuck HQ. The first thing we noticed was there were a lot of people, around 250. Klinger became very excited and drooled at the mouth. The more people the more kills was his thought. Skinny Pete and I started wondering what we got ourselves into. Judging the competition on general physique alone we were in over our heads.

20:30 Cadre Moka Mike gathered the crowd with his booming voice and gave us our “hit list” and explained general rules. Moka Mike then asked one veteran from each branch of the military to come forward, along with first responders and a mother. Klinger represented the army in this ceremony, which YHC thought was an honor. Skinny Pete began to step forward to represent a mother, but Paperboy stopped him. He thought the cadre said mother f@#$er. The cadre play the national anthem and thanked all for their contribution for our country.

After the ceremony, we looked at our hit list. We had 14 waypoints to make, each of which was a park, monument or other notable structure. To prove we made each waypoint we had to post a group selfie on Instagram with a corresponding hashtag. “What’s instagram?” asked Paperboy, “What's a selfie?” asked Klinger, “What's a hashtag?” said Pete, “not to worry” said YHC “these things justify the existence of my generation.”  Paperboy and Skinny Pete began plotting out the course with the GPS while Klinger and YHC plotted with the map. After 30 seconds we decided the map was stupid and we were glad no one made them anymore.

2100 the the horn was blown and the clock started. We loaded our rucks and told our feet we were sorry for what was about to happen to them. The course laid out in a loop, so half the teams went south and the other half north. We were on the north route. We began working our way to the first waypoint. 400 yards out of HQ we stumbled upon a group of teams taking a selfie with a statue of a surfer, but this was not waypoint we were looking for. We were looking for the Jax Beach Pier, and this was not Jax Beach Pier. We should not check this waypoint off, yet. It’s 10 feet away and it will be closer on our way back. As you can see, 10 minutes in we were already outsmarting ourselves. Paperboy started as navigator, but quickly passed the duty on to YHC, which was the best move for the group seeing asYHV was the only one with the Navigator Patch.

The first 3 waypoints came easily. All were within a few miles of the start. waypoint 4 was an hour ruck away through some residential areas of Jax beach. Roughly 3 miles from the waypoint we met a group of 20 or 30 ruckers backtracking in our direction. They informed us that there was a gated community ahead and the security guard on duty was not allowing safe passage. The conservative approach was to back track 2 miles and circle around this private community. We overheard another team planning to dead reckon through the woods. This would cut miles off and put us ahead of the other teams. The ringleader of this outfit ended up being a GoRuck Cadre JC who was Klinger’s Cadre for his Heavy and a Recon Marine. Klinger felt confident in this man’s ability so we took the bet.

Another team from Tampa followed, who YHC called the Tampons. We “broke brush” for 200 yards until we were halted by an 8-foot chain link fence. While contemplating our options, we learned one member of JC’s team was the infamous 001; who was the first man to complete GoRuck Selection. He ended up being a halfwit who seemed light in his loafers. He insisted JC call Moka Mike to bring them a ladder. Paperboy decided that Selection must be pretty easy if this man did it and said he was HC for Selection. After Moka Mike side-buttoned 001’s call, we resorted to climbing the fence. Acting as one cohesive unit, we began passing rucks over and giving boost. YHC thought this was very impressive; three teams would work together, even though we were in competition. As that thought crossed my mind, the last of the Tampons was coming over the fence and I turned to see JC and 001 taking off on their own. Karma quickly caught up to them, because they were discovered by the HOA security. The Bookbag Bandits and the Tampons agreed to work together until we got out of this neighborhood.

Tripping over yard gnomes, patio furniture and dog shit, we stayed between the woods and the houses to remain covered (an area about 10 feet in width). This idea worked well until we came upon a house with a well lit back porch. Inside was an old couple watching Jeopardy. Paperboy wanted to ask if he could sit down for a bit and play along. I’m sure they could exchange hip replacement stories. Not able to keep off the street any longer, we decide that running down the sidewalk was our only way out. Paperboy reluctantly followed. We managed to make it to the exit before crossing paths with the rent-a-cop. For a moment we thought he was going to let us pass without comment, but he apparently had something he needed to get off his chest. This large, angry man informed us the definition of private property and the State of Florida's penalties for trespassing. There were a lot of things we wanted to say, but didn’t because our mothers taught us better.

From the amount of time it took to climb the fence juxtaposed with the 30 minute lecture from the HOA police, we probably gained 100 yards on everyone who went around. The next waypoint we found Moka Mike and other GoRuck staff. They were handing out oranges and bananas like a bunch of soccer moms; however, the gesture was appreciated. I bent over to tie my shoe next to Moka Mike’s minivan and looking me right in the face was Jason McCarthy's 4-legged friend, Monster. I have never seen a more apathetic animal in my entire life. I guess a bunch of dudes wearing heavy backpacks was getting old to him.

At this point team morale was at an all, time high. We had some bonus calories in our bellies, and being ahead of schedule had lots of things to talk about, such as: selection is a joke, Marine Recon is a joke, HOA rent-a-cops are a joke, Skinny Pete sucks at climbing fences, etc., etc. The miles went by fast and our competition was seen less and less, which can only mean we were moving faster than expected. We reached waypoint 7 around 0300, which was the welcome sign at UNF. We took 5 to rest our feet and backs and replenish electrolytes. Then, out of the darkness came JC and 001 and the Tampons. We learned that JC’s team was caught by the rent-a-cop, but they were given a ride on a golf cart. We offered some food to 001, which he declined. He explained they had a support vehicle on the way with supplies, and he only eats fruit smoothies while rucking. The fact we were ahead of them, even with this unfair advantage, speaks to how hard the Bookbag Bandits really were.

We had to backtrack 6 miles in order to reach the next waypoint, which really flattened our spirits and killed morale. Klinger and Paperboy began discussing Revelations, which was frightening. Klinger kept mentioning Thor and Odin. Someone needs to check which version of the Bible he reads. YHC discoverd that sleep rucking is possible. One minute YHC was at UNF, and then woke-up and had walked 4 miles. At the same time, Paperboy was talking my head off by telling me that when he grows up he wants to be a hardcore mountaineer such as YHC.

Around dawn we reached waypoint 8. We decided to take 10 minutes to change socks, refill our water and eat. Klinger also was having issues with Castillo de Mexico coming back for revenge. The next waypoint was 8 miles away straight down a road that paralleled the beach. We knew this was going to be the hardest part of the trip. It was 8 miles there and 8 miles back, all on the the same straight road. It was as we expected: long, hard miles. It took about 2.5 hours to reach the waypoint, which was a public beach access known as Mickler's Landing. Upon arrival we found discouraging news: there was no potable water. Being resourceful, Paperboy began making a small talk with a local soccer mom. She told us we all smell bad, but she had about 1.5 liters of water we could have. This was well received.

For YHC the 8 mile ruck back was a conflict between the mind and body. Mentally, I had a renewed spirit due to the thought we would be finished soon; however my body, particularly my feet, reported they had given me all they had. I walked on through the pain. Skinny Pete entered some sort of catatonic state where he didn’t respond to questions unless it was “do you need a rest?” Klinger and Paperboy walked ahead and finished their discussion about Ragnarok. YHC entertained himself my thinking of the beer waiting at the finish.

After hitting our last few waypoints including the surfer statue, we returned to GoRuck HQ. We were disappointed to learn that JC and the Tampons had beaten us by a few minutes, but we are also very satisfied to place 20 out of 82 teams. Our total time was 17 hours 36 minutes, which is a long time to be walking. We received our patches and had a few sips of beer before heading to the Hotel. How I made the 15 minute drive to the hotel is the greatest mystery to me. We are all pretty sure it was divine intervention.

The questioned that keeps getting asked is “would you do it again?”. It took me 3 days to finally admit I would. All told this was an awesome experience with a great group of guys, and most importantly we gave it our best.