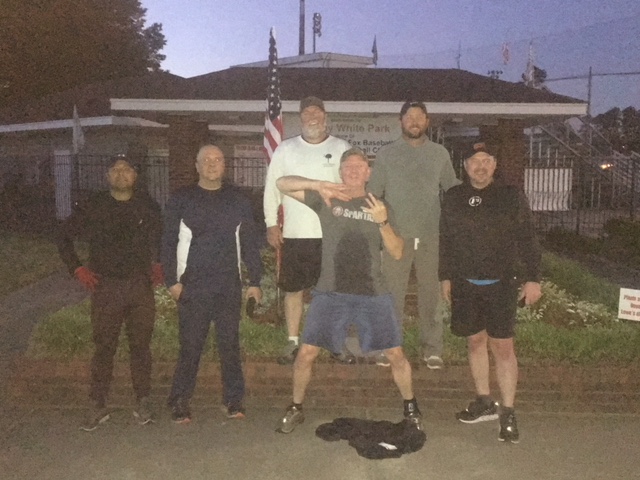 So our great and fearless leader NanTan GreenAcres was begging for help with his GridIron crowd. He said they were scared to sign up for Q and were being pansies about the rain, cold, and pollen that you have to deal with  by being outside. To help out with 1 issue YHC signed up to Q this morning. Low and behold it was a nice 43 and clear out this morning.

But no GreenAcres. He tried to play it off by saying he was "planting corn". Funny how that tractor was parked in the field at 0515 with no lights on or people around it. He must have been on a quick break and definitely not in the Fartsack. That goes for the other 24 on the GridIron chat too.

The Thang
4 cones were set up in approximately the middle of the soccer fields in a square 15 yards apart
Start at a cone, run out to a corner, do exercise and run back.
When you return you Bear Crawl from the cone you started at to the next then run out to corner and perform next exercise until time called.

Exercises
12 Burpees
20 2-count FlutterKicks
25 Merkins
40 LBC’s
We ran until 6:07, called Recover and circled up for COT
All PAX covered at least 2 miles this morning (the last few out and backs may have been "louder" since Goldie was hollering something about being hit by a bus would be more fun)
Name-o-rama, CountOff, Announcements

Devo was on accountability to your brothers in F3 which should lead you to be accountable to others in your life and don't let excuses get in the way.

"200 miles in the books! Got an excuse? Who doesn't, but we control whether or not that excuse controls us and allows our mind to keep us from reaching our goals. Just Do It!!!"

I found the above quote on my phone yesterday and it dated back to the 2017 Palmetto200. Don't let the excuse you used this morning to sleep in be the same excuse you use in the morning or Thursday morning.

Goldie closed us out in prayer and a little extra love was sent Fudger's way.